This was everyones first time playing Martin Wallace’s a Handful of Stars. I had purchased the game on a whim back in March and have been trying to get it to the table since then. On Tuesday night some members of the Denver GMT+ group being Martin Wallace fans were kind enough to give it a play. A couple of the players, Jason and Robert, had played and enjoyed the game’s spiritual predecessor a Few Feet of Snow and so were familiar with some of the game’s mechanisms, this helped make the initial teach smooth and other than a few questions the game seemed quick to pick up.

I shuffled and dealt out a race to each player. Robert was dealt the Peacenyms, James received the Technoids, Jason got the Exploremords and I would be playing the Aggroloids. Dang! I really wanted to be a bot :) The name of each of the factions subtly spells out their main starting strategies. Despite my initial hesitation, I lucked into the faction with the most straight-forward strategy: attack with overwhelming force and expand.

Look who just moved in next door! 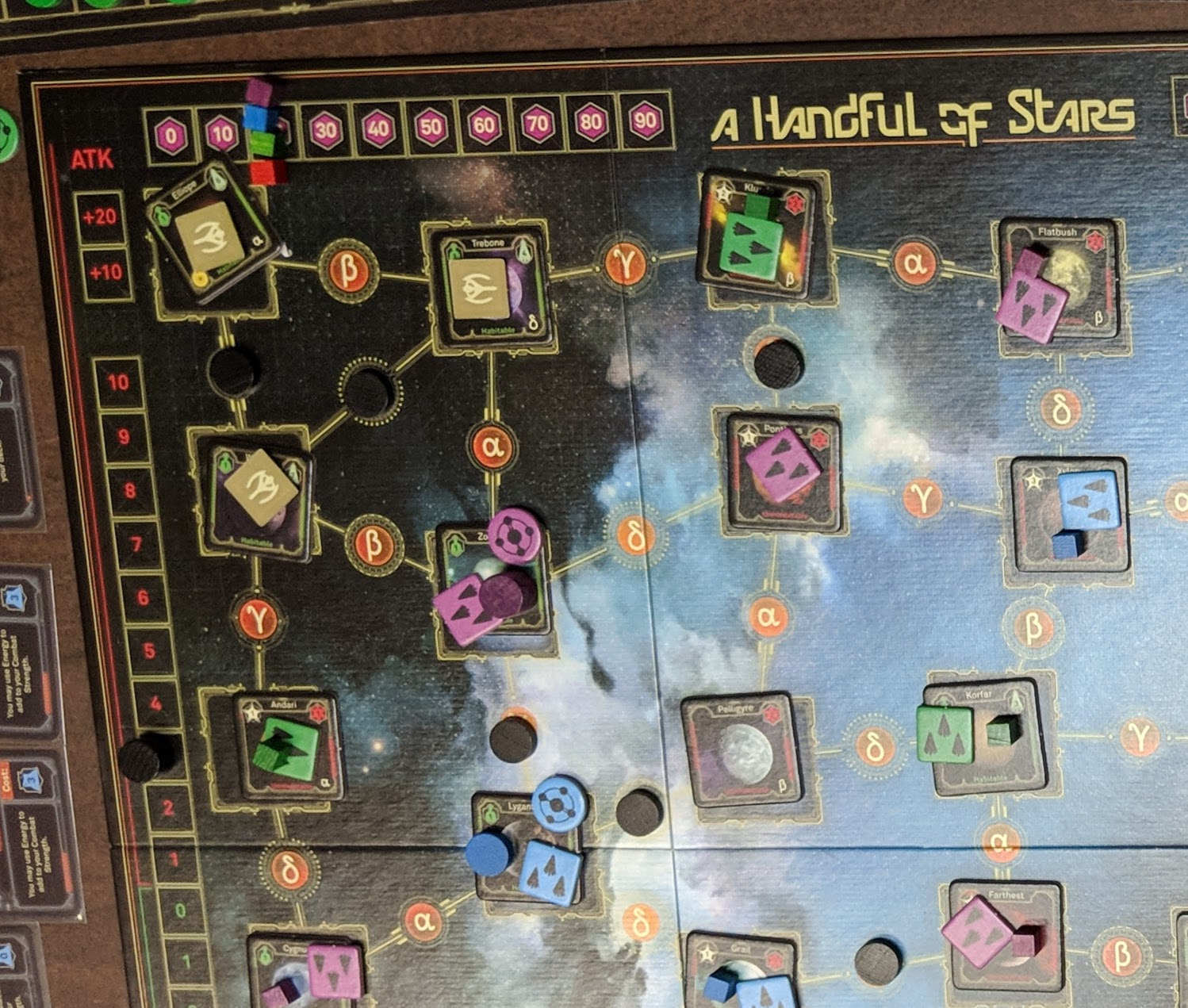 The Aggroloids starting position, in the “Northwest” corner of the galaxy.

The Peacenyms, who began the game with a consolidated position with 4 systems in the bottom edge of the galaxy, started the game off “peacefully” by attacking and colonizing one of the Exploremords habitable systems near their Federation. The other players soon found out, that with 2 space mine cards in their reserve, once the Peacenyms annexed a territory it was very difficult to get it back. Next, James, with the Technoids, placed an outpost on an uninhabitable system.

The other 3 factions simultaneously selected the southern part of the board as the location of their home world, Crowded Neighborhood

When it was my turn I first placed the Super Dreadnoughts in my reserve, this is an amazing race ability card that added +4 combat strength to any force of mine with a fleet, and then moved in and conquered the habitable system Trebone. It was always exciting to flip over the alien neutral combat token to see how powerful the force you were up against was: the range was 1-9, but it feel like we mostly bumped against the higher part of the range. :)

By the time the Exploremords took their first turn they were down to 2 habitable systems that were hemmed in by other factions. Also there was no place for them to jet to with their exploration abilities. 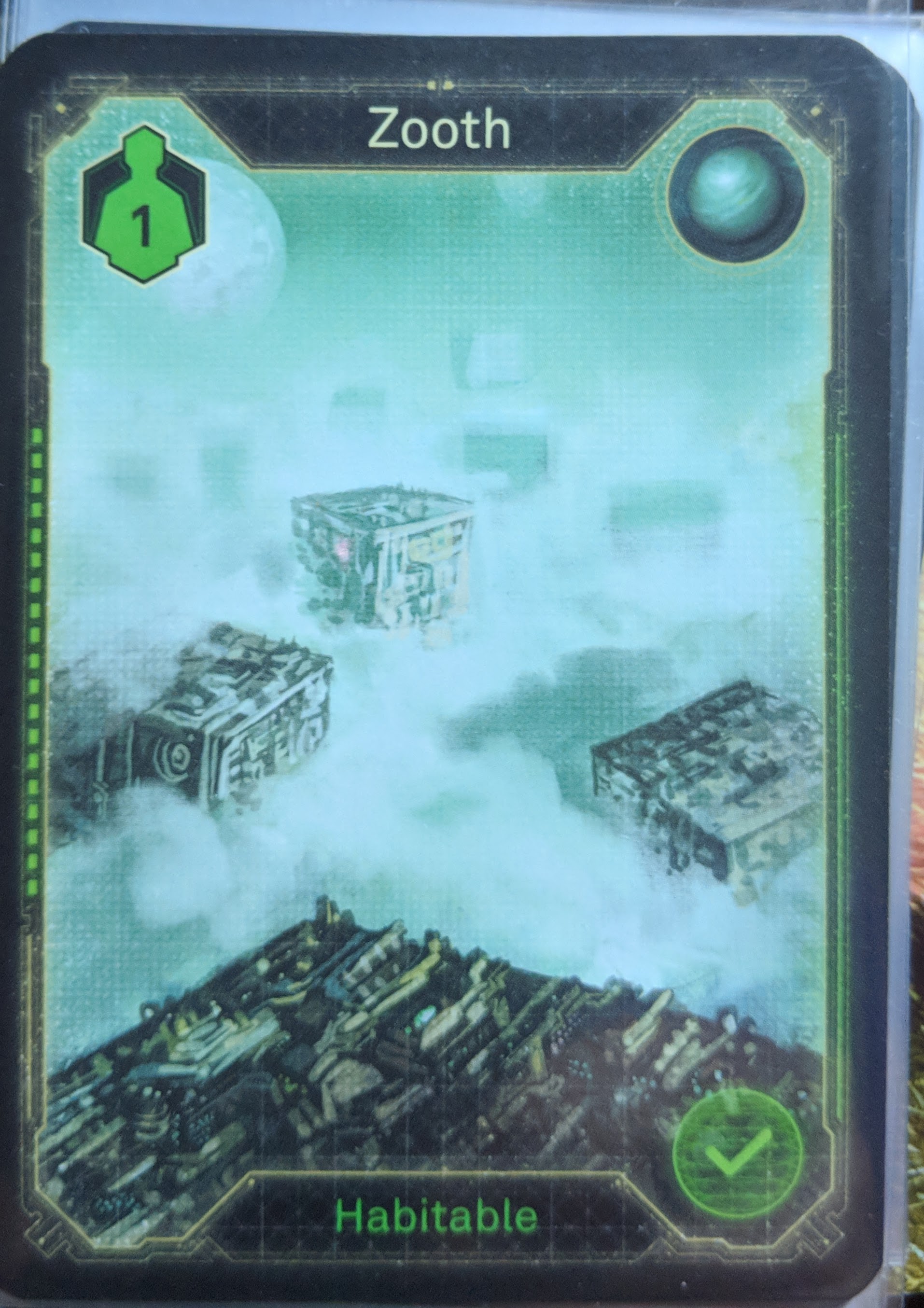 My homeworld Zooth, inherited from my half-Borg Aunt, Zelda of 13.

The Peacenyms and the Exploremords built up forces in the south, while the Aggroloids continued their plan of annexing the neutral systems in the Northwest. The Technoids made some inroads into Aggroloid territory overrunning a couple uninhabitable systems in the Center North and also developing wormhole technology first.

The power of the Aggroloids Star Bombs and Super Dreadnoughts and the Peacenyms now 3 Space Mine reserve led to a slight lead by these factions. The other factions made a last ditch effort to attack the Aggroloids and the Peacenyms weak spots. The Technoids destroyed the Aggro colony on Elliope, bringing in a force through a wormhole, and colonized the system for themselves. These last round losses were not enough to even the score and the Aggroloids and Peacenyms shared a victory at 43 vp. (They also had the same ammount of systems which is the tie-breaker.)

One thing I loved about this game was the natural narrative arcs of each faction. I’d read this in another session report, and was bit doubtful, and yet at the end of the game everyone was competing telling war stories of their game. I feel like this is a function of the races with their race ability cards, the inspiring art and also the engaging gameplay. I really enjoyed the game, emptying my hand in combat and excitedly redrawing. I never felt like I ever had a weak hand, just some (when I had a star bomb and rapid reaction force) were stronger than others.

With 4 players a game really starts in the middle of the action. A majority of the systems are already spoken for and the factions start feverishly grabbing the rest, so there is no slow build in this game. Also the endgame trigger of 20 shuffles kept the game moving.

One potential weakspot of the game was also a fun part of it, the opening system draw. Some players are going to start with better opening positions. Also, I loved the asymmetrical factions, but my Aggroloids were a better fit for the crowded 4 player start than other factions and my opening cards felt very powerful. However I did feel by the end of the game, I was very short on research abilities. Never having more than 2 or 3 research available. So perhaps as the game progresses the factions start to balance out.

Another weakness that other players mentioned was the downtime between turns, when there was one or two combats between your turns you were in for a bit of wait and the board state would be quite different and therefore often require that you rethink your next move when it became your turn.

I loved the art of the game. The system and technology cards and the main board are all beautifully illustrated. I loved all of the system names from Arcturus to Flatbush to Zooth. And the different factions really begged for coming up with stories about what they were doing on every turn. The fleet and starbase tiles are a bit underdone, but you quickly forget about the white cardboard underside and just look at the planet art and the cards.

I really enjoyed playing the game, and can’t wait to play again with new factions, though I do sort of fear coming up against the Star Bomb and Super Dreadnoughts when they’re in someone else’s hand :)